When life brings hard knocks, some just come out singing 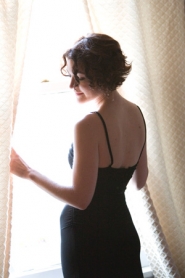 A vocalist who soars from standards to new blues, Shelly Rudolph’s out to make more of the talent that flows forth from “Water in My Hand.”

She is petite and well-turned out, with finishing school poise. But she also has an earthy, playful side.

The way it all fits into one package is what gives the 37-year-old Rudolph a unique appeal both on stage and on record. She proved the latter with her first solo album, “Water in My Hand,” earlier this year.

Apart from the the record’s artistic accomplishments – Rudolph’s supple voice gliding confidently through a range of musical styles – it shows Rudolph’s ability to create intimacy with her audience by channeling herself into revealing portraits based on her own personal peaks and valleys.

“I immediately loved her stuff and I could relate to it,” says Joe Woodard, one of two Santa Barbara, Calif.-based musicians who teamed with Rudolph in producing “Water in My Hand.” “It is a balance of strength and vulnerability that’s in the music and in her person.”

“She draws people in easily,” Grant says. “She gives off a very positive, warm kind of energy. People love her. They have a big reaction to her.”

“We have so much fun together,” says Rudolph of the New Orleans transplant.

Rudolph, who was raised in Eugene by a single mom who ran an art gallery and has studied mythology and psychology, has faced some personal challenges in recent years.

Two years ago, Rudolph hit her head in a scary, middle-of-the-night fall, one that may have been caused by an allergic reaction. She was not hospitalized, but headaches continue to plague her.

And she is still dealing with the dissolution of a long-term relationship that ended after a short-lived marriage.

Clearly, both events still color Rudolph’s world, even as she moves forward artistically.

“It was sort of like a wake-up call,” she says. “Like I need to do my art. I make a leap, and usually it has to do with what’s been going on in my personal life.

“It sort of feels like the more stuff I’ve been through, it makes me stronger, which makes it possible to be vulnerable,” she says.

Songs get many shadings

In a town wealthy in talented female performers across a range of genres, Rudolph has a rich, agile voice that allows her to be many things: sensuous or urbane, vulnerable yet battle-tested.

On “Water in My Hand,” which was released in the spring, Rudolph’s stylings lean toward the jazzy pop grooves of the late ’70s. Parts of the single “Miles Away” could have fallen off a Steely Dan record.

There also are echoes of earlier eras of blues, jazz and even gospel and country. She talks about her esteem for singers like Etta James and Nina Simone, but sounds like she might’ve unwittingly absorbed some Bonnie Raitt as well.

“She has a really rich, warm, sweet voice, and she kind of bluesifies everything,” Grant says.

Rudolph learned piano as a child and began singing in high school, but relies heavily on gut feelings as an artist. She considered attending the prestigious Berklee School of Music in Boston, but wondered if formal training would somehow derail her natural gifts.

“A lot of musicians I really admire are often not music-school musicians,” she says. “I’m definitely an intellectual, mental kind of person, but when I talk about my musical process, I don’t even have words for it. Something else kind of takes over. It’s so instinctual.”

Woodard, co-producer of “Water in My Hand,” says Rudolph’s instincts are good.

“There were points in the creative process where we might have felt, ‘Oh, we nailed that, let’s move on,’ ” he says. “Shelly came back in her firm but gentle ways and said, ‘No, this isn’t it.’ In every case she was right.”

Rudolph, who is feeling good these days, says she’ll go on playing hunches.

“It’s been a very productive year,” she says. “Making the album was huge because it’s all my own stuff. I think it had been kind of bottled up. That was a big leap.

“I really want to make another record. I feel much more myself than ever.”

"Every so often an artist comes along that literally has it all...great songwriting, a beautiful seductive voice and  a passion for music that jumps out of whatever machine or mechanism you may be listening to the music on. Shelley Rudolph is that  special artist and Water in My Hand  is that special CD. Shelley possesses that natural, earthy tone that can't be taught in a music class. Her voice caresses your ears-and her sassy attitude keeps you coming back for more. If you are one that loves music and you want to fall in love again-look no further than Water In My Hand-I promise you won't be disappointed".

Leading from the Heart

Shelly Rudolph and a World Filled with Soul

While music can transport a listener to far off places emotionally, spiritually, and even geographically, it also leads its creators on an equally tantalizing journey. In presenting her evocative variety of soul, Portland-based musician Shelly Rudolph has traversed the breadth of our nation. From Los Angeles to New York, she has fed her musical muse with the experiences of life. And those experiences have not only invigoratingly worked their way into her sound, but have molded and shaped her heart and soul.

Yet the location that has imparted perhaps the most significant influence on Rudolph’s music has been Santa Barbara. It was here Rudolph crossed paths with musician Joe Woodard (the guitar-playing author of, among other things, The Indy’s Fringe Beat column), engaged herself with Tom Lackner’s Tompound Studios, and recorded her newly released album Water in My Hand, which navigates a rhythmic landscape just as wide ranging as her journeys. Lush in both feeling and tone, Rudolph seamlessly blends her rich palette into a sound that she affectionately calls “world soul.”

“I actually made that up myself,” enthused Ruldoph. “I was just trying to find where I fitted in and ‘world soul’ just popped into my head. Even though I have traveled a lot, one thing I realized is that, no matter where I am in the world, I am still me. I’m still experiencing everything through my ‘Shelly’ way of feeling things. The phrase seems to cover the world and how we’re all connected to one intimate place so well.”

Despite her nomadic adventures, Rudolph has recently carved herself quite an inspiring creative niche in Oregon. It takes something special to lure her away from Portland’s natural beauty and artistic inspiration that nurtures both her music and spirit, but the chance to once again join forces with the musicians who helped craft her album is the perfect opportunity. With Woodard, Lackner, and Ken Stange in tow, Rudolph is about to set forth upon a tour of Southern California.

The tour will not only offer Rudolph the opportunity to reacquaint herself with her collaborators, but her performance at SOhO will also let her revisit the town that played such a significant role in the album’s evolution, something of a musical homecoming for the songs. One might suspect that bearing your heart and soul to a roomful of listeners is a rather daunting prospect, and something such an emotive musician might be conscious of.

“Now I am, for sure!” laughed Rudolph when posed that question. “I do a lot of jazz and blues standards and when I started adding a couple of the songs from my album to the set I can feel my heart start pounding. It is amazing how different it feels. No matter how much I feel someone else’s words, it is much more scary to be speaking with my own. It is very exciting, but it also gives me a very vulnerable feeling, too. But I am not really in charge of it at all anyway. The songs just come out and an album takes its own direction. I just go wherever the music leads me.”

HOME, AND WHERE THE HEART IS

The day is damp, and, to borrow a description from one of Shelly Rudolph's songs, "Chet Baker gray." Even so, Rudolph sits in a Northwest Portland cafe and talks about how good it feels to be back living in Oregon.

"It's so much cozier here," the Eugene native says. "I got tired of L.A. I felt very ungrounded there, and eventually even kind of silly."

The vagaries of the music business no doubt account for such feelings. But for Rudolph there's been a tug of war between career opportunities and home comforts -- which helps explain why she's left and come back. Repeatedly.

Since she started out as a singer, Rudolph has moved from Eugene to New York, Portland, Los Angeles, Portland, Santa Barbara and again, about a year ago, Portland. "With a few months in the Caribbean as well," she adds. "Which I liked the best. Oh, and a little time over in Japan and Korea."

All that mileage, however, isn't why she landed on the phrase "world soul" to try to describe the style of her new album, "Water in My Hand." When it comes to genre, where she lives is a more complicated matter.

For one thing, Rudolph might easily be taken for a jazz singer, especially if you'd caught her in the few public performances she's made as she re-establishes a presence in the Portland music scene.

"Sometimes I feel my voice fits that old soul and jazz stuff, Etta James kinds of things," she says. . . . But when I write, this is what comes out," she says, tapping a finger on a copy of the new album.

Parts of "Water in My Hand" have a jazzy feel, but the album's primary template is a sort of supper-club take on R&B, and a wealth of other influences course through it. The connective thread is Rudolph's passionate, soulful delivery.

Rudolph hopes to play official CD-release shows in March. For her Saturday show at the Blue Monk she'll mix songs from the album with her more standard jazz-club repertoire. "I'm so excited to do this original material," she says (Rudolph wrote or co-wrote every song save a cover of Bruce Springsteen's "Fire"). "It's great to connect with people in that intimate way. But it's much scarier, too."

Rudolph's predilection for the intimate comes across in the unabashed romanticism of her lyrics but also in a yearning for a more universal connection. And this is where some of the nonmusical aspects of Rudolph's background -- from her University of Oregon studies in psychology and anthropology to a stint working in what she describes as "a metaphysical bookstore" -- come into play.

"That's a theme to my album, too," she says. "Most of them are love songs, but there's the psychological aspects and the cultural and mythic part and how those interact. And there's that place where we're all exactly the same. Being that vulnerable and open can get you to the place where you feel that we're all connected in that really internal place."

That place that's home to a world soul.